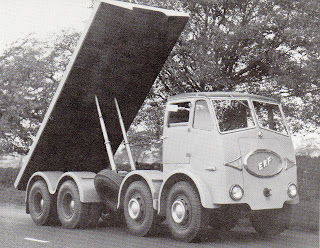 I had a comment from Old Vic in my UK Truck Photos post about the unusual ERF. It looks to me like the earlier ERF cab that had an upright grille, but with the  later KV grille fitted. With some further investigation I found this photo in the late Pat Kennett's World Trucks No.1 book. He describes it as a "hybrid" cab and comments that he thinks one has survived in the fleet of Beresford Transport. It's very similar to my picture, the only difference being the straight line to the bottom edge of the door, whereas my one has a curve over the wheel arch.
Posted by Trev Jones at 7:26 PM

Trevor
Thanks for posting the photo of the Renault at the Wellington Truck Show. The ugly bugger closing the door is my old man Guy Hepworth who worked for Todds selling Mitsi's and ultimately Renaults for many years.

I spent many school holiday's when i was a teenager in the Stockies Road Commander, so seeing your pictures together was a treat.

The old man passed away a few years ago, but like all lost ones they're always with us.

Kia Ora from a kiwi in London.