WHERE IS THE STONEFIELD? 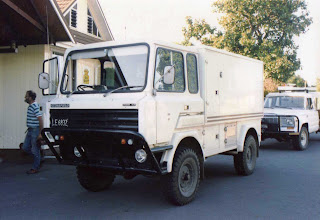 I posted this picture of a very rare Stonefield some months ago, which led to me being contacted by a Stonefield enthusiast in the UK. It turns out that this was the only Stonefield imported into New Zealand.
It was imported for the NZ Army to assess. Eventually the Army decided on another brand of vehicle and the Stonefield was put up for sale. It was purchased by the DSIR and used as a mobile seismic laboratory, as it was when I took the photo. The UK Stonefield enthusiasts are very keen to know of its whereabouts and condition today. I have had contact from an ex-army engineer who was part of the team which dismantled and assessed it and also from an ex-owner who sold it around 2000, but no-one seems to know where it is now. If you know please e-mail me as I would be interested in getting some photos of it in its present state, to forward to my contacts in the UK.
Posted by Trev Jones at 8:46 PM

looks like it's still around somewhere
https://www.carjam.co.nz/report/?ref=4FBF67BA shows it's rego on hold with a personalised plate now?

I used to drive this when it was brand new and I was doing my apprenticeship for Domtrac Equipment it was quick and fun to drive. Was a bit of a favorite with most of the employees. V8 and auto and quicker than many factory muscle cars. Often wondered what happened to it